When Jon Chad and Alec Longstreth decided to start a pinball-related zine, they agreed to produce seven issues (I think so Alec could create a “dream machine” for each of the Harry Potter books). Radiator Comics now holds copies of the seventh and final issue of Drop Target Zine. Every issue has had its own theme, and appropriately, this issue is about pinball’s future. Less is the focus on pinball technology (though there is a cool interview about some pinball innovations), but it’s more about keeping pinball vibrant, inviting and fun so more and more people will get into the game.

Drop Target Zine has definitely made me more interested in pinball, now I notice machines in bars, and am far more into throwing a couple quarters into them and playing a few games (poorly). Alec and Jon’s enthusiasm for whatever they’re into is unparalleled, and very infectious. Thanks to Jon and Alec for spreading the pinball gospel. 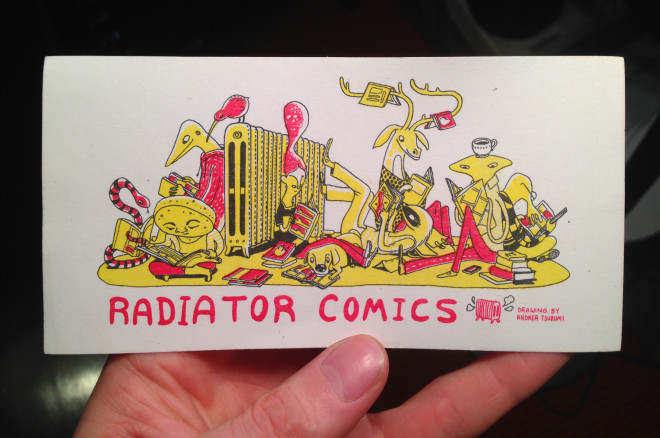 Matt Davis at Perfectly Acceptable Risography printed up some beautiful prints of Andrea Tsurumi’s Radiator Pack art! Each Radiator Pack subscriber will receive a copy of the print in their shipment this month! Order your Radiator Pack today!

We’ll be at three events this September, and hope to see you in either Bethesda, MD or Chicago, IL!

Small Press Expo (aka SPX)
September 19 & 20
North Bethesda Marriott
Bethesda, MD
The premiere alternative comics festival in the U.S. is back for its 21st anniversary! We’ll be at table E12 with Jeremy Tinder, Kenan Rubinstein, Marnie Galloway, Penina Gal, Reid Psaltis and Sarah Becan! Plus 13 other Radiator artists we represent (including Ignatz nominees, John Porcellino and Georgia Webber) will be tabling at their own tables!
http://spxpo.com

2nd Annual Great Chicago Fire Festival
September 26
5:00 – 10:00pm
Northerly Island,
Chicago, IL
Redmoon and the City of Chicago join forces to present an evening of performances, spectacle and a towering inferno! Radiator is returning as a neighborhood vendor. Cathy Hannah, Jeff Zwirek and Mike Freiheit will be joining us!
http://chicagofirefestival.com