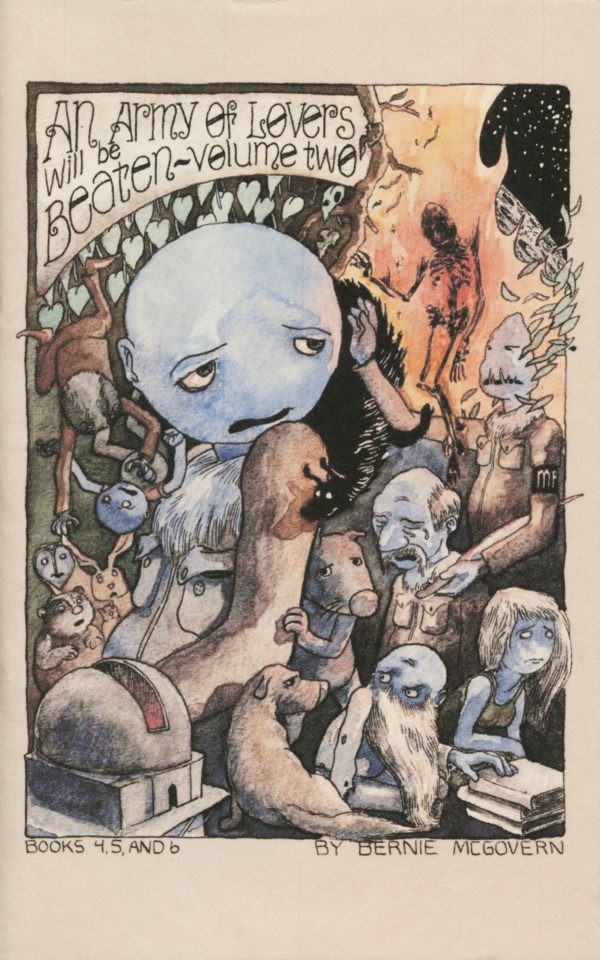 An Army Of Lovers Will Be Beaten vol. 2 by Bernie McGovern

from the series An Army of Lovers Will Be Beatenself-published

“There has been much foolishly violent searching for comfort of body and mind.”

In An Army of Lovers Will Be Beaten by Bernie McGovern, we meet a peaceful blue race that has been fooled by a power-hungry baron to make war against a constellation of stars. Our main character, Lt. Buckley, is a war hero who haphazardly killed one of the star of the constellation, and is given a week’s vacation to the sea-side port of Catalpa. Instead of escaping the war, Buckley finds himself surrounded by those scarred by violence and trauma.

In this second volume, Lt. Buckley falls into several deep sleeps and in his dreams witnesses Lichi’s murder of Major Willow’s family. When Lichi decides to kill Buckley for what he’s seen, Sgt. Turtledove, Oakley the dog and Pebbles the mouse try to save Buckley as he continues to dream, first about his now dead children, and later remembering a moment from his adolescence, which is interrupted by a llama who is seeking sexier dreams than what Buckley can provide.

In his travels, Buckley meets Landfrey, a hermit who fell in love with a goddess, and turned is love into a mountain. Meanwhile, Oakley the dog has visions of that same goddess, this time in the form of a Great Mare, and joins the llama in its quest for smutty dreams.

Poetic and surreal, Bernie’s comic phases between reality and dream, both while characters are asleep and while they’re awake. Tensions rise, mythology builds, and this multi-faceted story grows more complex!

Be the first to review “An Army Of Lovers Will Be Beaten vol. 2” Cancel reply