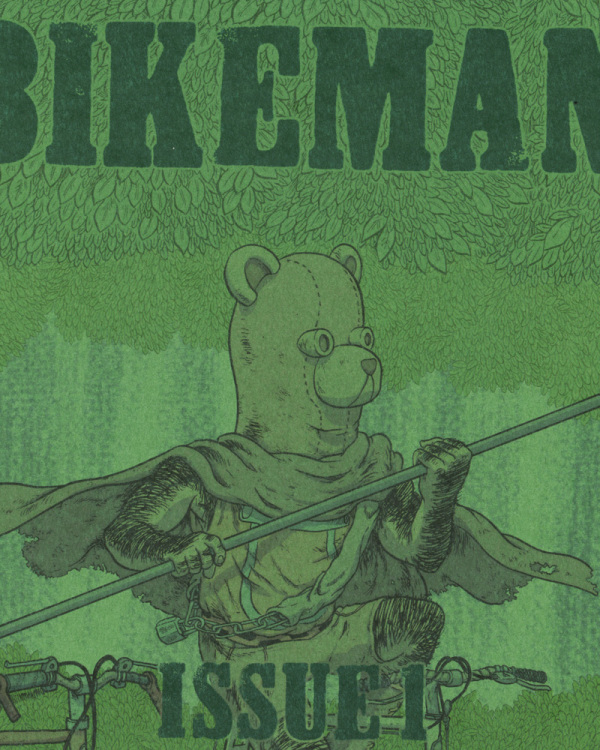 Bikeman No. 1 by Jon Chad

Who is the mysterious man with a herd of bicycles?

Only 10 left in stock

Category: minicomics. Genres: Action & Adventure, Fantasy & Science Fiction, For Young Adults. Concerning: animals and bears and bicycles and community and magic and nature and romance and violence and wolves and work.

The Bikeman is a hermit who wears a bear-mask, and lives alone in a mountain cave. Well, “alone” might be the wrong word to use, for he lives with a herd of bicycles, who come alive at his command. In his solitude, he fixes and trains and maintains the strongest, most loyal bikes in the land!

In issue one of Jon Chad’s exciting adventure, we meet the Bikeman and his herd as he fixes them, and takes them fishing and fruit picking. We also meet Shif, an old man from the village La Cartha, and his young, inexperienced, and eager companion, Pedl, as they seek out the Bikeman to trade bike parts and an old cart-pulling bicycle for one of Bikeman’s young bucks. We also meet a mysterious figure who stalks Bikeman in the woods, a man who also wears the mask of an animal.

Monsters! Living bikes! Bears! Bikeman has it all, and Jon draws it all with both precision and energy! A great introduction to a wild ride!

Be the first to review “Bikeman No. 1” Cancel reply

A mad scientist both on paper, and with paper!

FREE SHIPPING on domestic orders over $60 through December 31, 2020! Dismiss