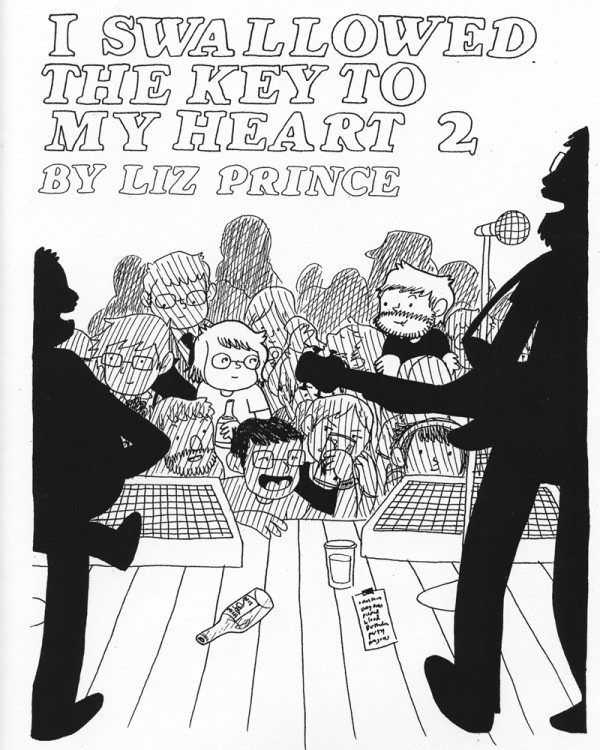 I Swallowed The Key To My Heart No. 2 by Liz Prince

Liz Prince's continuing saga of dating…continues. Well, that was a disappointing blurb.

I Swallowed the Key to my Heart No. 2 is the funny and unsettling tale of Liz Prince juggling several romances at once. Liz has an “understanding” with her friend Craig, that they’ll make out sometimes, but they’re not dating, and she’s also still kind of hung up on her ex, Evan. But then a tall handsome guy Paul goofily hits on Liz at a show by stepping on her foot, and she’s intrigued. But will pursuing Paul (who he himself is involved in more than one relationship) lead to problems with her other beaus?

Apparently this is everyone’s favorite issue in Liz’s series, because there’s a hot & heavy make out scene. But what gets me excited is the slow-motion train wreck Liz sets up early on that we then watch explode over the course of the comic. Everyone agrees Paul’s attempt at flirtation was pretty pathetic and when Liz finally hangs out with him, it’s clear he’s not the sharpest tack in the box. It’s also pretty obvious that Craig is more invested in their “understanding” than Liz, and just the mention of another guy hitting on her gets him bent out of shape.

Come for the sizzling sexy parts, stay for the smoldering romantic disaster.

Be the first to review “I Swallowed The Key To My Heart No. 2” Cancel reply