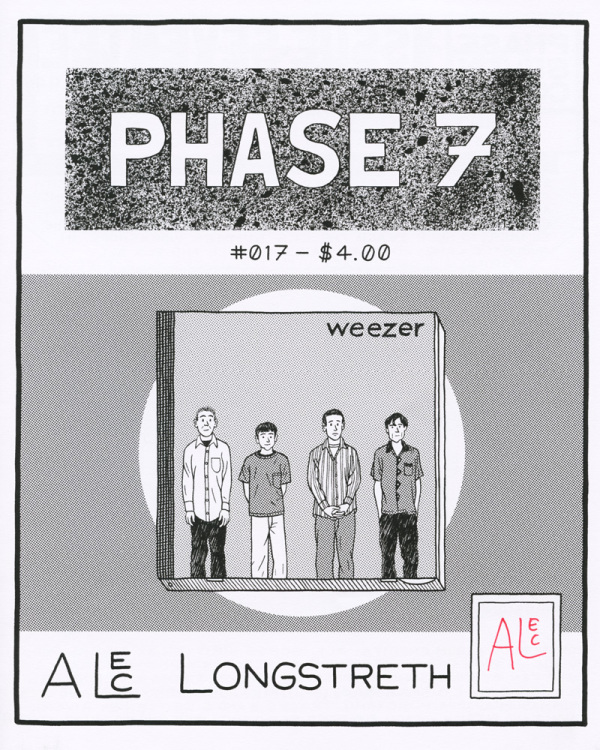 Phase 7 No. 017: Weezer Fan Part One by Alec Longstreth

Autobiography through the lens of Weezer’s Blue Album. Plus, step-by-step instructions for a successful “Buddy Holly” karaoke performance.

Only 3 left in stock

The seventeenth issue of Alec Longstreth’s one-man comics anthology, Phase 7 starts his “Weezer Fan Trilogy,” in which Alec dissects his love for the band. Alec’s story starts where a lot of Weezer fans’ does, with his introduction to the band’s first album, which fans call the “blue album.” Alec tells ten stories that relate to each song on the album, from a death-defying introduction to the album in the back of a teen’s speeding car, to the quiet meditation of listening to the final track -Only in Dreams, lying in the dark in his parents’ living room.

Folks who know Alec know he can get pretty excited about things, and this issue illustrates that on every page. Alec’s stories tell of his exuberant obsession with the band, memorizing not only the words to songs, but the guitar solos, drum beats, etc, and how they tied into significant emotional moments in his high school and college life. I’m the same age as Alec, and had many similar experiences as he did (we both had sisters give us the album because they were getting rid of music they didn’t want, we both had dangerous experiences in cars while the album was blaring), and for a lot of folks our generation, Weezer’s Blue Album’s anthem after anthem of insecurity and loneliness have a strong grip on our hearts.

Alec Lonstreth has a serious case of minicomics fever, and it's terribly contagious!