View cart “The Dirt Palace” has been added to your cart. 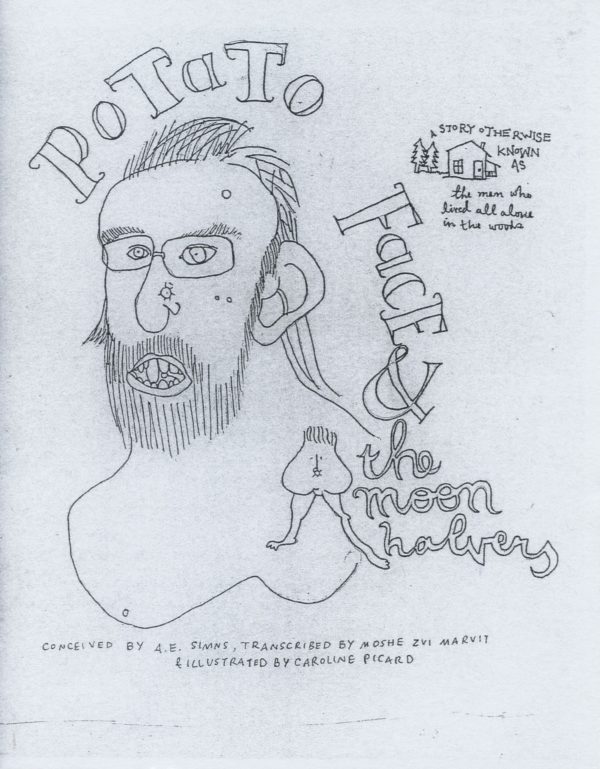 Potato Face & The Moon Halvers: A Story Otherwise Known as the Man Who Lived All Alone in the Woods by Coco Picard with A.E. Simns & Moshe Zvi Marvit

The strange tale of Potato Face, an OCD man in the woods, and the non-human Moon-Halver friends he keeps in his basement.

A Folklore & Mythology / Humor minicomic for all ages about dancing, friendship, isolation, and seasons.

What a weird comic.  Coco Picard teams up with authors, A.E. Simns (Cashmere & Lust, Green Lantern Press) and Moshe Zvi Marvit (Urbesque, Green Lantern Press) to tell a surreal mash up of different fairy tales elements. Poato Face seems to have the touch of King Midas, except everything he touches turns into a miniature version of his own head. The Moon-halvers are turnips that look like butts with faces and tiny legs, but act like the shoemaker’s elves – cleaning up Potato Face’s cabin after hibernating in the root cellar. Jack and the beanstock gets in there too with magic beans Potato Face sneezes out of his nose.

You know, just your run-of-the-mill mini you’d expect from a contributor to the New York Times.