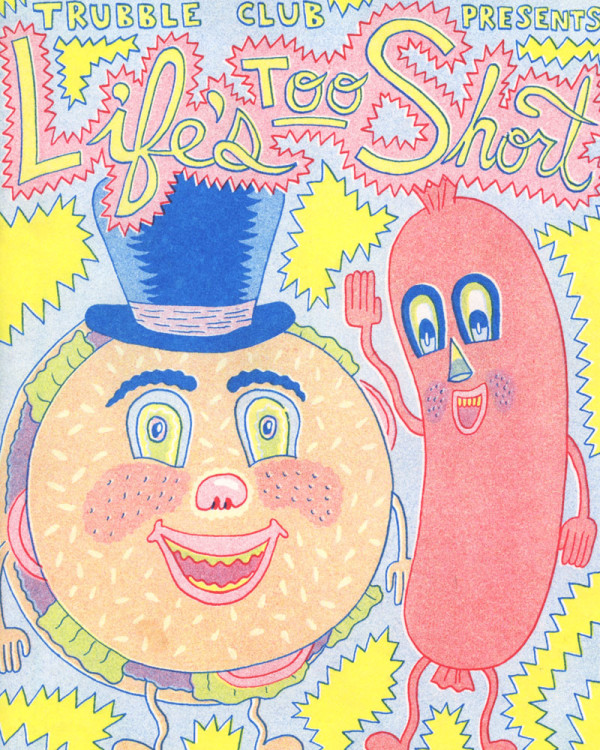 Meat your favorite new sitcom characters, Larry the hotdog, and Gary the hamburger!

Trubble Club is a group of Chicago-based comics artists who usually draw improvisational jam-comics together. Life’s Too Short mixes up their normal approach, as members team up to write and draw short comics starring a hotdog named Larry and a hamburger named Gary. This hilarious collection is presented as a television show with short stories that nod toward different TV genres, like crime or comedy.

Kevin Budnik and Nate Beaty put Larry in hot water when he accidentally schedules dates with two different ladies in “Double Date.” Gary’s got some solutions in that ground-beef noggin of his!

Jessica Campbell and Ben Bertin put Larry and Gary on opposite sides of the law in the hard-gritty crime drama, “Law and Burger.” They team back up in “Home on the Range” when Gary tries to lift Larry’s spirits after a suicide attempt.

Aaron Renier and Kevin Budnik crank up the gore and guffaws as Larry and Gary hunt down a diamond thief on the night of Larry’s anniversary (with Gary’s old flame, Patti!) in “Diamond Entanglement.”

Aaron and Nate wrap it all up in a nice bun with Life’s Too Short’s opening credits.

Be the first to review “Life’s Too Short” Cancel reply