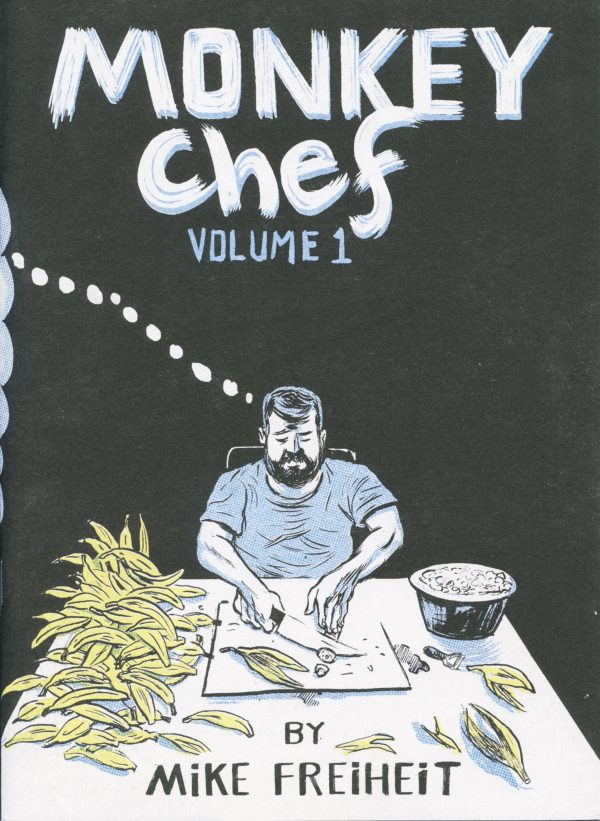 from the series Monkey Chefself-published

Monkey Chef tells the story of the nine months Mike Freiheit spent in South Africa as a chef for a primate sanctuary, preparing food for both the monkeys and their caretakers. Three vignettes make up the bulk of the first volume, and they range in style from fantasy to human melodrama.

In one, Mike is always finding frogs in his closet whenever it rains, and it occurs to him, that the frogs are not making a home in his closet…his closet has been placed on the frogs’ home. This spirals into an imaginary folk tale of a frog empire that was once tricked from its home by the farmer who built the complex within the primate refuge is now held. The frog Mike finds in his closet has grand ambitions of reclaiming its ancestral home!

In the most nuanced story in the first volume, Mike tells us about his favorite marmoset, Kismit, to whom Mike feels a connection. Through the story, Mike compares Ksimit’s antisocial behavior to his own, as he deals with difficulty connecting with the other humans at the refuge. Mike explains when marmosets who used to get along become hostile toward each other, there is no going back, they will be hostile to each other for the rest of their lives. Mike finds himself alienated from his co-workers and seems to ask if humans can ever truly shed their own feelings of hostility toward those they don’t like.

Mike’s drawings of monkeys are expressive and delightful, but what really stands out in this first issue is how strong and honest his autobiographical storytelling can be.

Be the first to review “Monkey Chef vol 1” Cancel reply