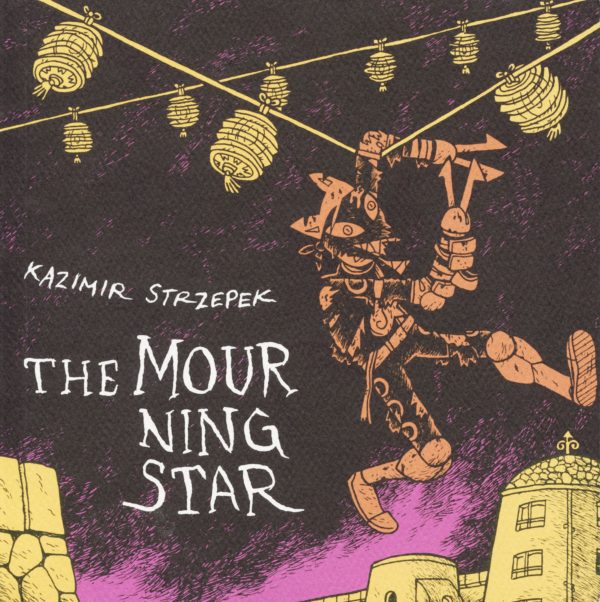 The Mourning Star No. 2 by Kazimir Strzepek

from the series Mourning Starself-published

Within walled cities, friends seek each other out, as political turmoil churns around them!

The Mourning Star is an epic post-apocalyptic tale of survival and friendship by Kazimir Strzepek. Taking place one year after a comet inexplicably diverts from its celestial course, and smashes into a planet’s surface. The cataclysm destroyed civilization, and allowed for new cultures to emerge. Now we follow an ensemble of characters as they work toward goals, some personal, some secret, and some forgotten even by themselves!

We return to Kazimir’s world where the hegemonic gang, The Rule are enjoying the spoils of their conquests in a raucous party, only to be interrupted by a masked figure who rampages against the unprepared thugs!

Meanwhile, Futch, the dream eater has been separated from his host Klavir, and their friend Wilm, and he must navigate the halls of the walled city of the Northern Cross, scrounging for food! Will he be able to be reunited with his friends?!

Far off in the desert the Snipper Sniper with memory problems is discovered by a group of kids from the nearby city of Caravan. They tell him the Rule is looking for him for cutting off one of their henchmen’s arms. Luckily these kids know secret passageways into the city, but are they really leading him to safety?!

In this volume, relationships become more complicated, narratives intertwine, and the lore and cultures of the world become more defined. What seemed like small details from the first book come back as major plot points. The dangers are greater! The deaths are more gruesome! And so many mysteries will nag at you!

Be the first to review “The Mourning Star No. 2” Cancel reply