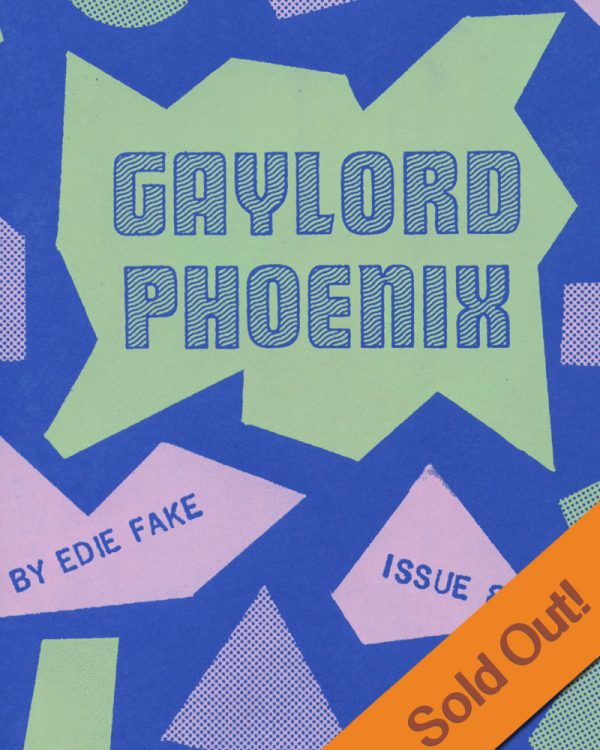 Gaylord Phoenix No. 8 by Edie Fake

a storm has hit hard and much damage has been done / in a broken hall / what heals? what helps?

Edie Fake’s Gaylord Phoenix saga is a poetic journey of transformation, sexual discovery, gender fluidity, and finding the love within you and within those who love you.

At the start of issue 8, the Gaylord Phoenix’s world is transforming, shaking violently, and their lover -revealed in this issue as the Way-Under Witch- has been injured. The pair descend into the Way-Under Witch’s subterranean realm, Gaylord Phoenix helping and supporting as the Witch heals in their familiar setting. Deeper still, the pair enters into the Phoenix’s inner world for even further healing, where they meet a new/old friend.

Edie’s signature mixture of fluid, clean line drawings, and hypnotizing patterns is stunning as always, and the poetic flow of the story whisks you deeper and deeper into the world of the Gaylord Phoenix! Simultaneously sincere and playful, Edie’s comic doesn’t shy away from tackling large ideas of identity and love, nor does it skimp on the puns and wordplay throughout!

The first six self-published issues of Gaylord Phoenix were collected into a single volume by Secret Acres in 2010. In April and September of 2017, Gaylord Phoenix fans were surprised by two new issues from Perfectly Acceptable Press [No. 7, currently out of print], and Pegacorn Press [No. 8! This one!]. We are elated to read new chapters of the Gaylord Phoenix’s journey.

Be the first to review “Gaylord Phoenix No. 8” Cancel reply