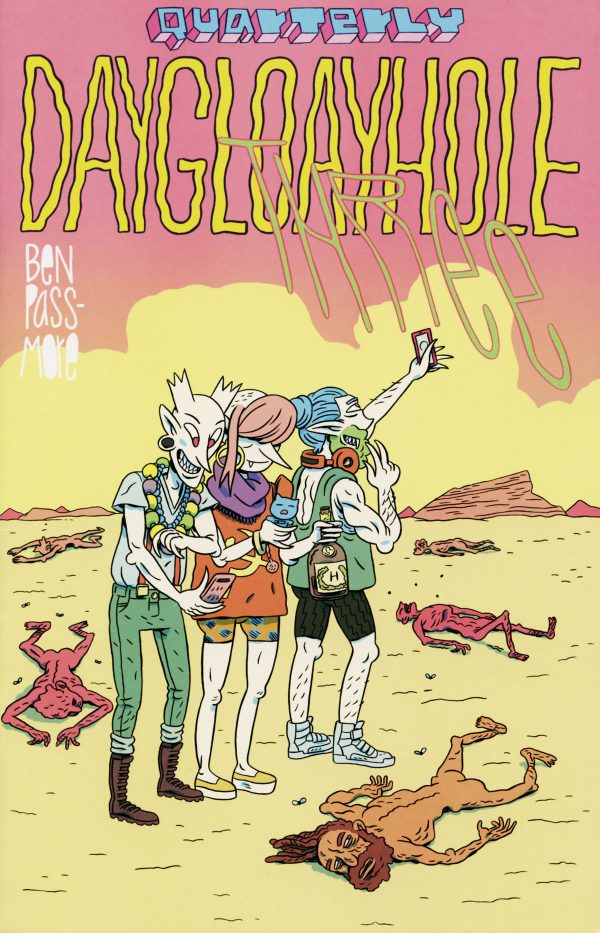 Daygloayhole No. 3 by Ben Passmore

from the series Daygloayholepublished by Silver Sprocket

I’ve been reading Daygloayhole since before it was cool.

Daygloayhole, the neon-color post-apocalyptic comic series by Ben Passmore is back for a third issue! Having been transformed into a cockroach, fallen in love and then dumped, and then lit on fire, Ben emerges from his cockroach husk, a human again…but there is some sort of strange beast lurking inside of him now. Ben quickly meets up with the story’s other protagonist, Nolimitz, and their dog, on an undending quest to satisfy their hunger in this bombed out hellscape. Joined by Ben’s dad, Scott -who left Ben when he was a baby, and has little interest in being a father now either- the group make their way through teams of mutant cops toward a towering robot, which houses a group of hipster demons who are literally consuming all remaining culture.

While Daygloayhole nibbles on issues of gentrification and police violence, Ben’s primary focus is personal issues. In previous issues he’s focused on his difficulties with romantic intimacy. In this issue his relationship -or lack there of- with his dad takes center stage. Ben balances the emotional subject matter with a good dose of humor, and a bunch of slicing mutant cops in half.

Be the first to review “Daygloayhole No. 3” Cancel reply