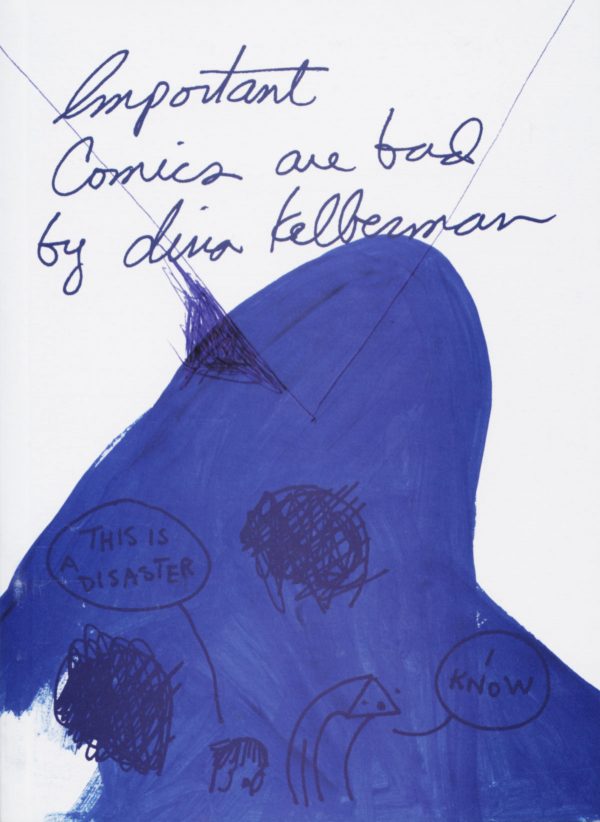 from the series Important Comicsself-published

What do you do when you’re accused of making bad comics? Make them worse!

I hope Dina Kelberman corrects me if I’m reading this book wrong, but here’s my take on Important Comics Are Bad:

This book collects comics printed in the Baltimore City Paper from 2008-2011. The first part of the book consists of well-rendered four-panel comics. These are goofy little comics that sometimes have clear punchlines, and sometimes are more evocative of a feeling or an idea (usually failure). Slowly the comics consistently become about how bad the comics are, which I imagine is inspired from feedback Dina was starting to get from readers of the newspaper (a sample of a letter to the editor about the comic is printed on the back of the book, urging the strip be cancelled).

Suddenly, we are presented with a two-page spread of just purple paper. After the paper, the comics’ consistent straight-lined panels and smooth drawings have been shattered, and Dina embraces the “badness” of her comic! Many of the comics in the second half are hilarious…but a lot of them don’t make any sense. But Dina is clearly having more fun with these comics. The final dozen comics descend even further into a sludge of messy lines and strange ideas, as if the comic itself was slowly dying.

Be the first to review “Important Comics Are Bad” Cancel reply