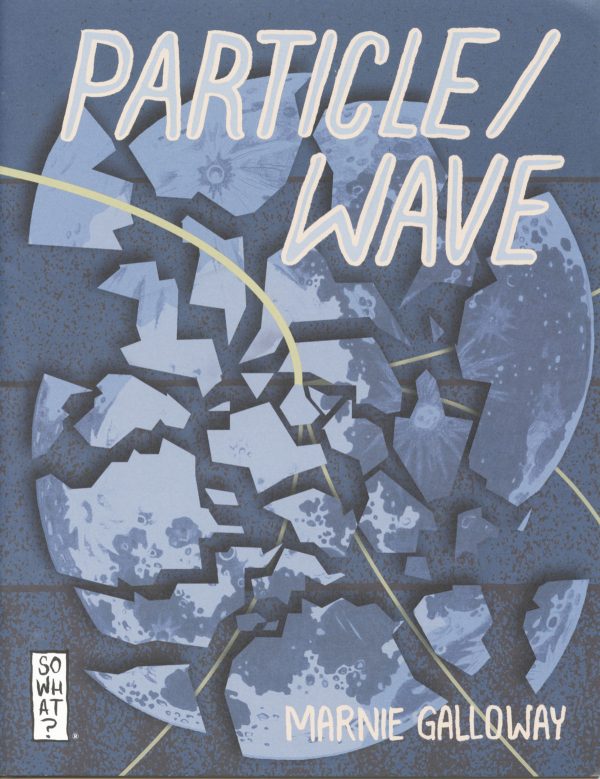 Two personal stories about family and the moon.

Particle/Wave is a split minicomic by Marnie Galloway about loss and estrangement, birth and familial bonds, creation myths and celestial creation. Both stories in this comic revolve around our own satellite, the moon.

In one story, Marnie creates a ritual for losing her brother. He isn’t dead, he’s estranged, and has a history of disappearing and reappearing, each time with negative emotional consequences. So the ritual -one that involves the moon- will be her way to mourn him, though Marnie slowly realizes this is easier said than done.

The other story tells how the moon was created when two proto-planets, Earth and Theia, collided eons ago. Like our resulting home and its satellite, Marnie makes connections between her identity and that of her unborn son. How his birth will be similarly violent and creative at the same time, how she will never be the same after the birth, and part of her will exist within him.

Marnie opens herself up in these two touching and heart-felt autobiographical investigations. With rich graphite drawings, she illuminates and reveals so much. One story doesn’t come before the other, and they do not necessarily intersect, but they each bounce off the moon, and find each other.

Particle/Wave is published by So What? Press

Be the first to review “Particle/Wave” Cancel reply