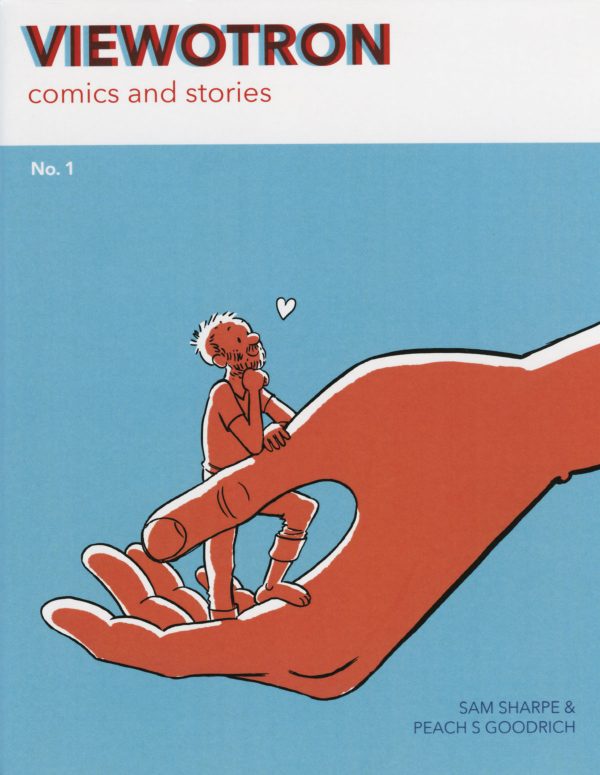 Viewotron is a two-person comics anthology, featuring 10 short stories by Sam Sharpe and Peach S Goodrich! Sam and Peach’s stories are inventive, humorous, and heartfelt. Sam’s tend to be more cerebral, revolving around an interesting premise: what if your friends invent a religion that catches on, or what if you were so lonely, your body shrank or expanded dependent on how a friend perceived you? Peach’s comics work more on a emotional level, one story focusing on the love and support of family and friends, and another about a misunderstood monster.

Sam and Peach have known each other since college (a portion of their college days are captured in one of their collaborative comics in the issue), and their comics style grew up together, influencing each other. Their stories compliment each other well, and their stylized cartooning is a lot of fun to read. Get ready to be delighted, and for a guffaw or two!

A Nerdy Note About Numbering

Keen observers will note this is NOT the first comic from Sam and Peach available through Radiator Comics to feature the name Viewotron, though it is numbered 1. AdHouse Books wisely restarted the numbering sequence with this issue -as this is the largest print run for the series, and will be seen by the most people. For those who want to dive deep into the numbering of Viewotron, here is -to the best of our knowledge- a list of every issue of Viewotron:

• 2011, Viewotron No. 1, a very short print-run featuring a hand-stenciled title on the cover. Included a comic about Jung LeRage, the world’s manliest writer, plus a reprint of “Change Your Name,” a comic that was featured in Pinstripe Bloodbath [edited by Jeff Zwirek], and was later expanded into Sam’s comic, “Mom.” Included a one-page comic written by Sam and drawn by Neil Brideau.
• November 2011, Viewotron No.1, contains completely different comics than the first version, featuring comics by Sam and Peach, including a love story between a woman and a clothes iron, and “Every Celebrity Ever,” which reveals deep dark secrets of Wallace Shawn
• Spring 2013, Viewotron No. 2, only contains Sam’s comic, “Mom,” which was nominated for an Eisner Award, and Ignatz Award. An excerpt was featured in Best American Comics 2014. The first run was self-published, Radiator Comics helped finance a second printing.
• September 2017, Viewotron No. 3, another very short print-run, the comics in this version were edited for the AdHouse edition. Only available at the Small Press Expo 2017 (it was sold at the Radiator Comics table, but like idiots, we didn’t grab a copy for ourselves).
• September 2018, Viewotron No. 1, published by AdHouse Books. Click the “add to cart” button!

Be the first to review “Viewotron Comics & Stories No. 1” Cancel reply

We're taking a quick break! All orders placed after July 4 will ship July 14.
All domestic orders of $60 or more qualify for free shipping. Dismiss